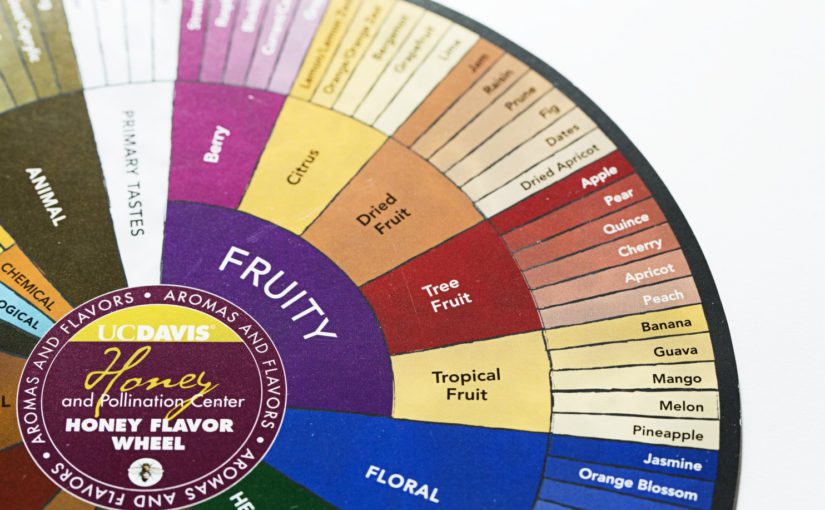 We have done several honey (and coffee) tastings and pairings this year – the latest one earlier this week with Honest Chocolate (because honey + chocolate = 2 x delicious ; ) These tastings are such a great opportunity to showcase the variety in local honeys. There was a time when we thought of honey as … well, honey. That was before we started beekeeping, and before we tasted the honeys from different gardens. Even hives in the same garden can produce honeys that are distinctly different in smell and taste – it all depends on the nectar sources visited by the bees. What’s the fun in eating honeys that have been blended for consistency if you can have honey with a peachy flavour (this year’s Muizenberg honey – honestly, it is peach jam disguised as a honey), or honey that tastes like flowers (our Overberg dune veld honey, wow)! At the University of California, they must have felt the same when they brought together a panel of 26 professional tasters from different industries (chocolate, wine, olive oil, coffee) to taste their way through a wide range of honeys. The result is the honey flavour wheel, which we use at our tastings to stimulate the imagination 🙂 It includes more familiar flavours, such as berry and caramel, and then some pretty off-the-wall ones – ever thought of a honey flavour as catpee, or barnyard? One of the most unusual honeys we have come across over the years is one from hives on a remote mountainside on the Agulhas coastal plain. It is almost black in colour, and its taste has been described as molasses, mouldy, black pepper, swamp (yep!), brandy & coke – to name a few notes from our tasting sheets. The great thing is, there is no right or wrong in tasting; flavour is in the bud of the taster so to speak. Our next plan: a honey tasting in one of the Gardener’s Glory gardens. Wouldn’t it be great to taste honey while watching bees at work? Hive-to-table at its best!